An extensive criminal organisation, which supplied class A drugs and laundered millions of pounds in illicit profits, has been dismantled following an investigation by the joint NCA and Metropolitan Police Organised Crime Partnership (OCP). 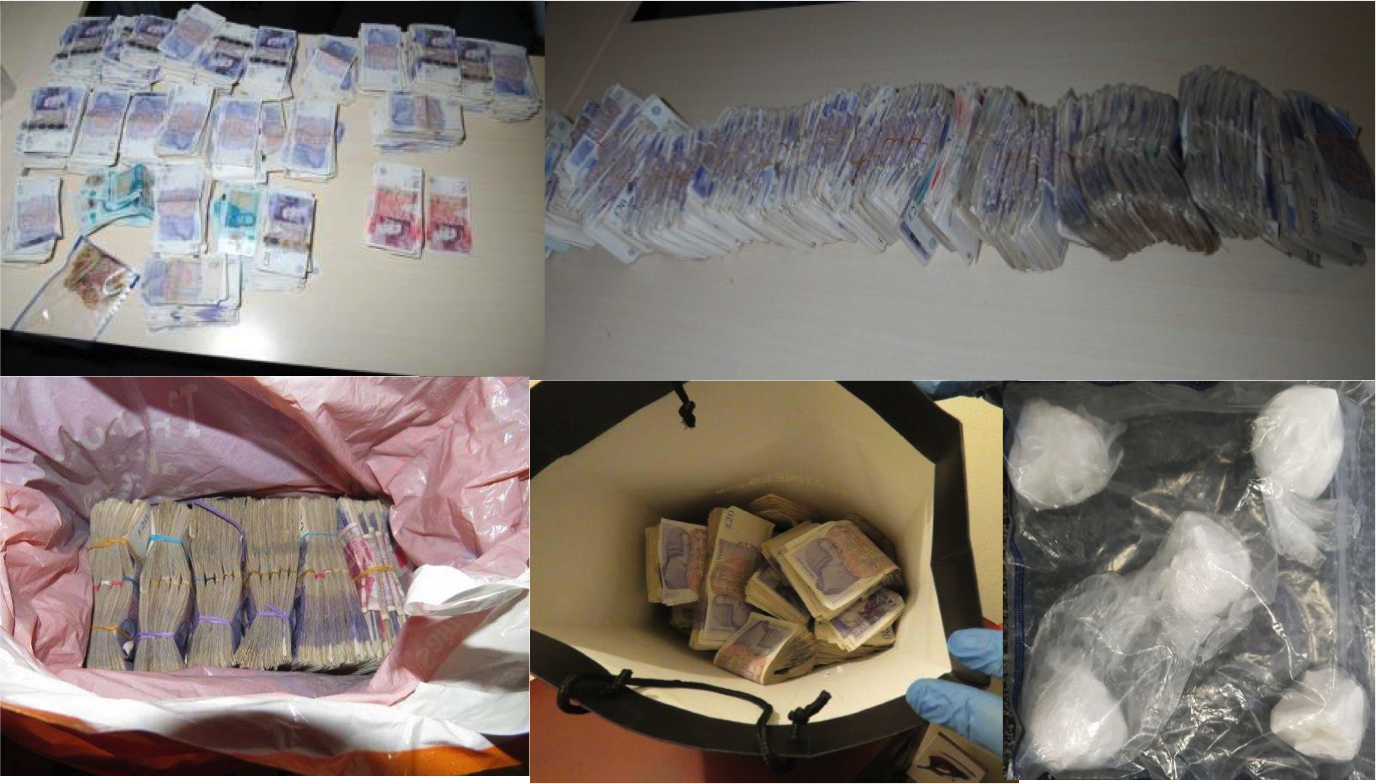 The organisation was led by Tilbury man Baljinder Kang, and his right hand man Sukhjinder Pooney, from Gravesend. They used encrypted smartphones as well as a succession of unregistered ‘burner’ phones to direct the group’s activity.

Members of the crime group trafficked millions of pounds-worth of illegal drugs across England. The proceeds were then deposited in cash into front company bank accounts, before being transferred to a destination account in Dubai.

During the course of the investigation, officers seized more than £1.4million in cash, with at least £1.8 million more known to have been laundered by the criminal network.

The OCP operation resulted in the seizure of over 37kgs of Class A drugs - including heroin and cocaine with a street level value of over £3.5m - a handgun with ammunition, and 50kgs of ketamine.

Numerous additional drug deals, including one representing “53¾” [kg] bought, were noted in ledgers found by officers searching Kang’s home address after he was first arrested in January 2018.

Despite having very little legitimate income, Kang lived a lavish lifestyle. He purchased luxury goods from designer stores including Gucci, Ralph Lauren and Harrods and owned watches worth £12,000 and £36,000. He also leased a Mercedes and an Audi A3, and travelled regularly to the United Arab Emirates.

One of Pooney’s cash couriers, Kieran O’Kane, was also found guilty of money laundering, while Webster Kenton and Abid Rasul were convicted of conspiracy to supply class B drugs - Rasul in his absence having absconded while on bail.

Baljinder Kang pleaded guilty to all charges against him on 23 May 2019. Money launderers Amir Ali and Aminoor Ahmed did the same, on 23 and 24 May respectively.

“This investigation has systematically broken up a significant criminal organisation which operated across the south east, west midlands and into the north of England.

“The drugs that Kang and Pooney’s group trafficked will have contributed to violence and exploitation along the supply chain, while their extensive money laundering operation exploited the UK banking system to move money offshore.”

“The threat from organised crime continues to grow, and there are many more groups in the UK engaged in similar activity to this group. The NCA and its policing partners are using all the means at our disposal to identify and disrupt them.”

“This was a lengthy and thorough operation involving extensive joint work between a dedicated team of Met and NCA staff – all of who are committed to dismantling organised criminal gangs.

“I hope that today’s result is a stark reminder to those involved in organised criminal activity that the Organised Crime Partnership is far reaching and will use all powers available to us to secure a conviction.”

Sentencing is scheduled for 24 July at Kingston Crown Court.

In the months leading up to October 2017, Kang was in regular contact with prolific Wolverhampton drug dealer Aaron Chander to discuss the supply of Class A drugs.

At a meeting in a steak restaurant in Harrow, Middlesex, officers overheard Kang advising Chander that he could supply “10 for 26”. This related to the supply of 10kgs of cocaine for £26,000.00 per kg, and was noted in one of Kang’s ledgers. Those books also contributed to the evidential case relating to Kang’s substantial acts of money laundering - the highest figure referenced is “1,524,690 PAID”.

On 2 October, officers observed Chander, Abda Saleh and Ferass Awwad meet in a Wolverhampton pub car park for the handover of seven kilos of cocaine. All three were arrested and later sentenced to a total of more than 30 years’ imprisonment, having pleaded guilty before going to trial.

Officers recovered a loaded 9mm Baikal pistol and ammunition, £250,000 cash, and a quarter of a kilo of crack cocaine from Chander’s home address.
**
On 19 October, officers observed Pooney subordinate Amir Ali as he entered a branch of Barclays in Halifax, West Yorkshire, and deposited £50,000 cash into the account of a sham company called Layton Commodities Ltd. He then drove to an industrial estate in Wakefield, where another car flashed its lights at him. Ali got into that car, and after exchanging tokens (a method of identifying that he was the correct recipient of the criminal property) was handed a large holdall. Ali then returned to his vehicle carrying the bag.

Ali and the two men he had met – Hummaad Khadim and Omer Sattar - were arrested, but not before Khadim had attempted to drive away at speed, knocking down an officer and ramming three police vehicles blocking his path.

The bag was found to contain £100,100 in cash. In total, 33 empty £5,000 cash deposit bags were found in his car and home address, all labelled as payable to the crime group’s front accounts for eventual transfer offshore.
**
Later that month, on 27 October, investigators arrested Daljinder Bassi, a close associate of Aaron Chander, as he drove from Birmingham to his Wolverhampton home with three kilos of heroin in his vehicle. During the subsequent search of his address, officers discovered approximately £750,000 hidden in a wall cavity, which was accessed by a homemade pulley system. 25kgs of cocaine, as well as heroin, hydraulic presses and mixing agents were also recovered from the property.

Bassi, who also pleaded guilty before going to trial, later received a sentence of 13 years imprisonment for drugs and money laundering offences.
**
On 14 November 2017, Kang met another criminal associate, Dinesh Nadesan, at a Pizza Hut in Croydon. This was Kang arranging his next money laundering venture.

The following day, Kang and Pooney entered a pub in Heston, west London, from where they watched their junior money courier, Aminoor Ahmed, remove a suitcase from a car. That vehicle was driven by another man, Chandra Suppu, the uncle of Dinesh Nadesan. Officers moved in to arrest Ahmed and Suppu, at which point Kang and Pooney rapidly left the pub. Kang said “f*cking hell, police... they got him..”, unaware that he was passing a surveillance officer as he did so.

The suitcase - linked by DNA to Nadesan - was found to contain £250,000 cash. Suppu, Nadesan and Ahmed all subsequently pleaded guilty to money laundering.
**
Kieran O’Kane, who had set up the Layton Commodities Ltd sham account at the behest of Pooney, and deposited huge amounts of cash into it, was arrested along with Aminoor Ahmed, who had set up an account known as Lushman Solutions Ltd, on 29 November. Ahmed had created false financial records in an attempt to legitimise the money.

It was discovered the O’Kane and Ahmed had deposited and laundered £345,000 of criminal cash through banks across the country in a ten day period.
**
On 19 December, officers watched as Abid Rasul and Webster Kenton met in Slough and exchanged 50 kilos of ketamine with a street value of £1.25 million. Phone records later revealed that Kenton was in constant contact with Kang in the lead up to the deal.

Prior to trial, Rasul absconded from the UK to Pakistan.
**
Having seen their criminal operation worn away, Kang and Pooney were arrested on 31 January 2018.