National Crime Agency officers have supported a major international investigation which has seen a suspected money launderer for the Kinahan organised crime network arrested in Spain.

The Irish national was detained by officers from the Guardia Civil in Malaga on 12 September, alongside his wife and another alleged associate. Officers from the NCA’s international network took part in the raid.

The Irish national was sanctioned by the Office of Foreign Asset Control in the United States in April 2022, following an investigation involving the NCA. The US Department of the Treasury designated him as having provided support to the Kinahan organisation.

Spanish investigators believe the organised crime group registered companies in the UK, Gibraltar and Spain to present a legitimate image. They created a brand of vodka promoted in nightclubs and restaurants across the Costa Del Sol to disguise their earnings.

One of those arrested is suspected of using his car dealership to provide vehicles to the criminal organisation, complete with concealed compartments to transport cash undetected.

“The Kinahan organised crime network transcends national boundaries, which is why international law enforcement operations like this are necessary. 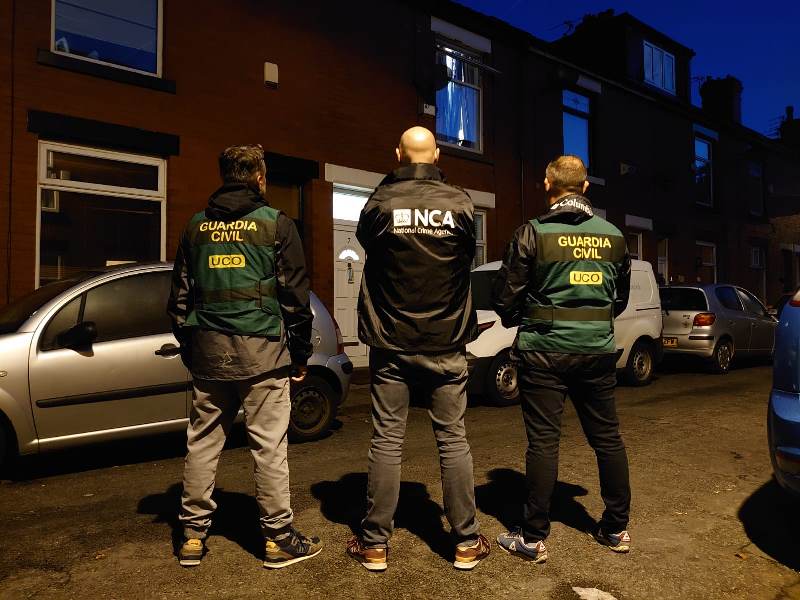 “The NCA has played a crucial role. We said at the time sanctions were imposed on the Kinahans back in April that we would not stop there, and we continue to explore every possible method of disrupting their criminal activity.

“Tackling the people who handle money for them is crucial, which is why this operation has been so significant, taking out a key component of the crime group’s wider network.”

The arrests in Spain triggered a series of searches by the NCA in the UK on 13 September, including residential premises in Heywood, Rochdale (pictured above), and Stepps, Glasgow.

The search in Glasgow was carried out by officers from the Organised Crime Partnership (Scotland), a joint unit comprising NCA and Police Scotland staff.

A number of items including documents, mobile phones and a quantity of cash were seized. No arrests were made in the UK.

The investigation, codenamed Operation Whitewall, was triggered by the seizure of more than 200kg of cocaine and half a million euros in the Malaga region in early 2021.

It has since involved the NCA, CPS and HMRC in the UK, the Guardia Civil in Spain, Ireland’s Garda, the Dutch National Police, the DEA in the United States and Europol.

NCA investigations have caused major disruption to the Kinahan group’s activity in the UK and beyond over the last few years.

In March 2022 Thomas ‘Bomber’ Kavanagh, who ran the Kinahans’ criminal operations in the UK, was jailed for 21 years along with brothers-in-law Gary Vickery and Daniel Canning, who were sentenced to 20 years and 19 ½ years respectively.

Evidence showed they were responsible for cocaine importations estimated to be worth up to £23.4 million, and cannabis importations worth around £6.4 million.

James Mulvey, another key player in the crime group, was arrested in Lithuania in 2017 after NCA investigators evidenced he trafficked drugs worth an estimated £68m. He is currently serving a 32-year jail term.