More than 250 kilograms of cocaine have been seized and six people arrested, after an investigation led to the interception of a yacht off the coast of Wales.

NCA intelligence had identified the vessel, the Sy Atrevido, 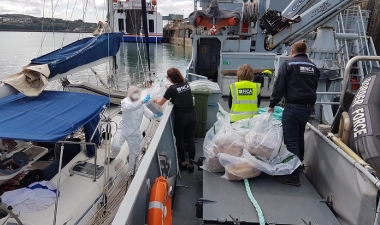 as carrying a large drugs shipment to the UK from South America.

As a result, officers from Border Force cutter HMC Protector boarded the sailing yacht  approximately half a mile off the coast of Wales on Tuesday 27 August.

The vessel was then escorted into Fishguard port and a search by Border Force’s Deep Rummage team began.

Officers discovered numerous packages containing white powder, which had been distributed throughout the vessel. Forensic inquiries indicate that this is cocaine.

The quantity found so far would have a wholesale value to criminals of around £8 million, and a potential street value of £20 million.

Searches continue, and investigators believe there may be up to 750kgs on board.

Two men aged 53 and 41 were arrested on board the vessel and remain in custody for questioning.

Four others - three men aged, 23, 31 and 47 and a woman aged 30 - were arrested in Liverpool and Loughborough. They were later released on bail until late September.

NCA Deputy Director of Investigations, Craig Naylor, said: “This is a substantial seizure of cocaine, which would have generated tens of millions of pounds in criminal profits.

“NCA officers on the front line play a vital role in tackling the serious and organised criminals that undermine the safety and security of our nation.

“These drugs were intended for sale on UK streets, where they will have fuelled considerable violence and exploitation. I’d like to thank all those involved in preventing them from reaching their destination.

“The NCA works with partners in the UK and around the world to target the criminal groups posing the greatest threat to the public.”

Deputy Director Steve Whitton, from Border Force’s Maritime Command, said: "This is a major seizure and a testament to the multi-agency approach we take to secure the UK's border and territorial waters.

"Our collaboration with the NCA, combined with excellent work from the crew of HMC Protector and officers from our specialist deep rummage team ensured that the sailing Yacht ATREVIDO’s cargo did not reach its intended destination.

"Working together, we will continue to do all we can to put the organised crime groups involved in drug smuggling before the courts.”