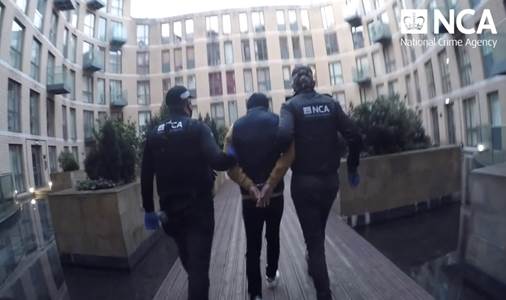 A Birmingham man suspected of being the mastermind behind a network of UK cannabis farms has been arrested as part of a National Crime Agency investigation.

The 33-year old Vietnamese national was detained on suspicion of conspiring to produce and distribute cannabis this morning as officers raided his home address in Essex Street, central Birmingham.

His 24-year-old female partner was also arrested and is now being questioned.

The arrests follow raids on a series of premises that were being used to cultivate cannabis, including a three storey former nightclub targeted in Coventry during an NCA operation on 15 October.

It was found to contain around 1,000 plants, worth an estimated £1 million. Three people were arrested and charged.

Other farms suspected of being linked to the crime group include one raided by West Midlands Police on the site of an old pub in Hockley, Birmingham, on 18 September, and another found by Lancashire Police at a former hotel in Clayton-le-Moors the following day. Each had more than 300 plants.

“The scale and sophistication of the cannabis farms we have uncovered as part of this investigation suggests a criminal network capable of producing cannabis on an industrial level, generating hundreds of thousands of pounds profit.

“There is an added layer of exploitation to these types of criminal enterprises, with the networks involved often using individuals who have been smuggled or trafficked into the UK illegally to run their farms.

“Working with our partners at West Midlands Police and Lancashire Police we have been able to dismantle this particular network, make a number of arrests, and our investigation continues.”