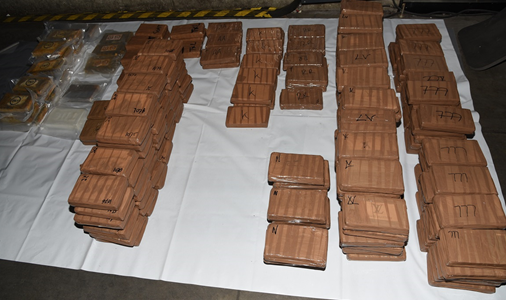 Two men have been arrested in connection with the seizure of cocaine worth around £11 million in Dover.

They are now being questioned on suspicion of attempting to import class A drugs.

It follows the seizure of 240 kilos of cocaine by Border Force officers at Dover on Sunday. The drugs were found hidden inside a concealment in an empty coach which had arrived on a ferry from Calais.

“Our investigation into this significant seizure of class A drugs continues with these arrests.

“We are determined to work with partners like Border Force to cut off the supply of class A drugs to our streets, and dismantle the organised criminal networks involved in their distribution.”

Two men have already appeared in court charged in connection with the seizure. Mark Tucker, 53, from Longshaw Street, Blackburn, and Christopher Bullows, 50, from Lord Street, St Helens, have been remanded in custody to appear before Canterbury Crown Court on 12 October. They were both arrested with the coach on 6 September.