Two men have been charged with drugs and money laundering offences as part of a National Crime Agency investigation.

The men were arrested in simultaneous raids on Tuesday morning at addresses in west Surrey and Hertfordshire.

They appeared at Guildford Magistrates’ Court yesterday and were remanded into custody.

They will next appear at Guildford Crown Court on 28 September.

The investigation into the suspects was part of Operation Venetic – the NCA-led, UK response to the takedown of encrypted comms platform EncroChat in 2020.

Two men have been arrested on suspicion of guns and drugs offences in a National Crime Agency investigation.

The pair were arrested in simultaneous raids this morning (Tues 23rd) as part of Operation Venetic – the NCA-led UK response to the takedown of encrypted comms platform EncroChat in 2020.

He was arrested on suspicion of importing cocaine, heroin, cannabis, conspiring to supply class A and B drugs, possession of a prohibited weapon and money laundering.

The Home Secretary Priti Patel was in attendance to observe the early morning strike. 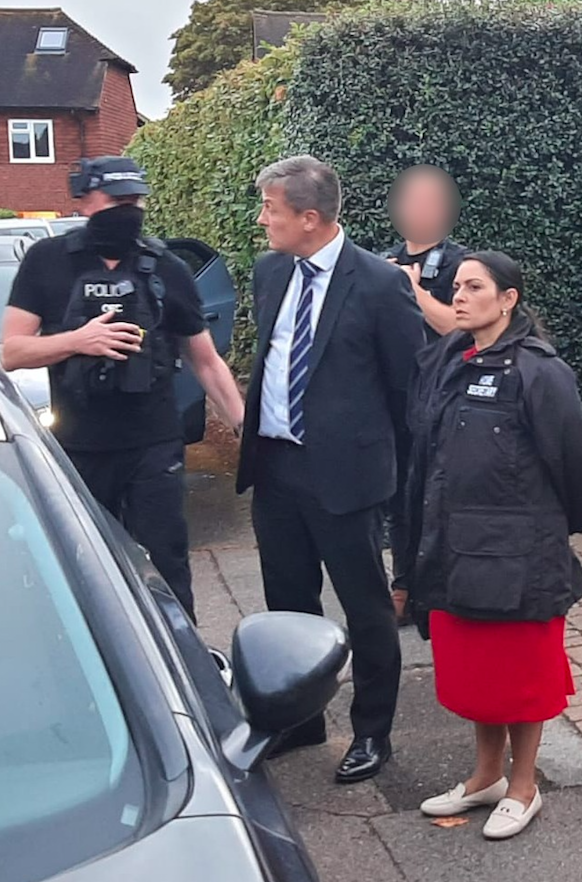 A second suspect, aged 40, of Waltham Cross, Hertfordshire, was arrested on suspicion of conspiring to import class A drugs, supplying class A and B drugs, possession of a prohibited weapon, conspiring to sell ammunition and money laundering.

Both properties were searched as well as a third property in Walthamstow, north east London. The men remain in custody for questioning.

It is believed the organised crime group has international links to offenders involved in high level crime.

Dean Wallbank, NCA senior investigating officer, said: “There are undeniable levels of violence and exploitation linked to illegal drugs and firearms in the UK.

“Both threats are priorities for the National Crime Agency and we work with partners at home and abroad to combat them.

“We believe the two arrested men were part of an organised crime group importing multi kilo consignments of class A drugs and firearms into the country.”

“Gangs exploit the most vulnerable people to run their grubby trade, all to line their own greedy pockets.

“We will not allow this to continue. That is why, working with policing partners, we have ensured more than 2,400 County Lines have been shut down since November 2019, more than 8,000 arrests have been made and more than 9,500 people have been supported to get the help they need.

“Through the policies and Drugs Strategy which I have led, we are investing over £3billion to combat drugs, helping to stamp out drugs supply, target criminal drug operatives at home and abroad, address drug addiction in our communities and make our streets safer.”