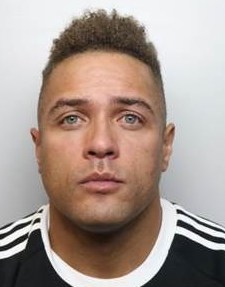 A man wanted by the NCA for his suspected links to firearms and drug supply in the North West has been arrested in Spain.

Clinton Blakey, 36, formerly of Dunstarn Drive in Leeds, failed to attend a court hearing last year after he was charged in relation to a Glock semi-automatic pistol, a Howa bolt-action rifle and 200 rounds of ammunition, seized at a property on Stainbeck Lane, Leeds.

After his no show at Leeds Magistrates Court, the NCA issued a public appeal and an international warrant for his arrest.

Last Thursday [30 September 2021], with the support of the Spanish National Police, he was located and arrested in Madrid, Spain.

The firearms & ammunition he is suspected of being linked to were being held by Paul Shepherd, 43, a former professional footballer, who was convicted of possessing the guns and ammunition in June and awaits sentencing.

Blakey’s original arrest followed on from Shepherd’s and was part of Operation Venetic - the UK law enforcement response to the takedown of encrypted communications platform EncroChat.

Their arrests triggered a number of others across West Yorkshire, Merseyside and the North East.

One of these was Gerard Wignall, 33, from Merseyside, who was sentenced to 16 months in prison after his DNA was found on the rifle in Shepherd’s house.

Two further men, Carl O’Flaherty, 36, and Shane Kameka, 40, also from Leeds, were arrested for their involvement.

O’Flaherty awaits sentencing and in July Kameka received a five month sentence for his part in arranging transport of the firearms.

An additional man from Durham, Darryl Hall, 36, was arrested, charged, and is due to stand trial next year.

Blakey was suspected of facilitating the transport of firearms and ammunition from Liverpool to Leeds where they were then stored by Shepherd.

He appeared before a Spanish Court earlier this week [4 October] where proceedings for his extradition back to the UK began.

“Our team in the UK worked closely with our international liaison officer network and Spanish police to track Blakey down, leading to his re-arrest.

“Illegal firearms are used by criminals to threaten, intimidate, and destroy lives. No matter the lengths we need to go to, we never stop working to bring suspected firearms traffickers to account."