Five suspected members of a Bolton-based organised crime group involved in drugs supply and money laundering have been arrested as part of National Crime Agency activity linked to Operation Venetic. 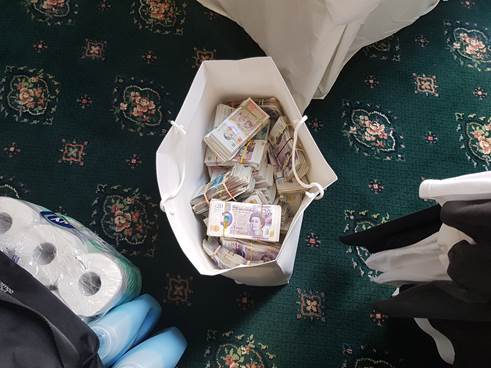 NCA officers arrested the first two men, aged 34 and aged 58, on 11 May 2020 for money laundering offences, following a cash handover in Bolton.

Surveillance officers had watched the money be transported to a property from a nearby property before the men were detained. £400,000 in cash was seized from the property, contained in several bags.

As the investigation continued, NCA investigators used intelligence obtained from the EncroChat platform to identify additional members of the network.

Last week the NCA announced that it had been working with international law enforcement since 2016 to target EncroChat – the supplier of encrypted devices used by criminals worldwide to coordinate the planning and distribution of illicit commodities.

The arrests stem from Operation Venetic, the largest ever UK investigation into serious and organised crime.

Two more suspected members of the Bolton crime group were arrested on Wednesday 8 July after NCA officers executed a number of warrants in the North West.

The men, aged 31 and 43, were arrested for money laundering and drugs offences.

£60,000 in cash was recovered, along with two luxury watches, across three properties in Bolton and Oldham.

A fifth man, aged 34, handed himself in at Bury Police Station on Thursday 9 July, following NCA officers searching his home in Bolton. He was arrested on suspicion of conspiracy to supply class A drugs and money laundering.

All five have either been released under investigation or on bail.

Mark Spoors, Branch Commander at the NCA, said: “This operation has made a huge dent in a criminal network we believe is responsible for supplying drugs in the North West, on top of laundering criminal cash.

“It’s yet another example of the impact in localities up and down the country of Operation Venetic, the most significant investigation into serious and organised crime we have seen in this country.

“The NCA, and our law enforcement partners, are working together to bear down on the criminals the pose the highest risk to the UK. Rest assured, we are not done yet.”