A Nottinghamshire man has been sentenced for importing and supplying illegal firearms which could have been converted to fire lethal ammunition. 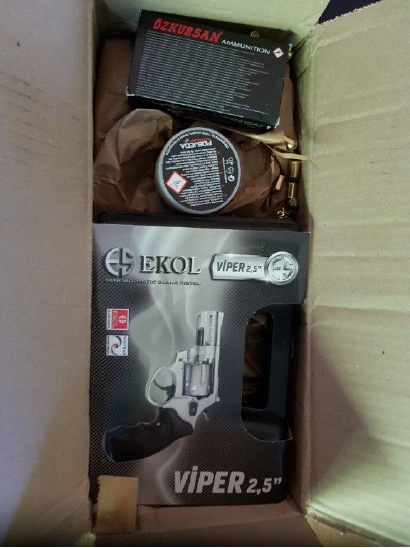 The weapon, which had been sent from Spain, had been falsely declared as a ‘decorative weapon, saber sword, and bayonet’.

NCA investigators found that Dawes had attempted to import an Ekol Viper front-venting blank firearm and 100 rounds of ammunition via Birmingham Airport in May 2020. These were intercepted by Border Force and destroyed.

Dawes also offered two front-venting blank firearms, a Bruni P4 and an Ekol Viper, for sale online to a man who was arrested by Essex Police in July last year.

He was attempting to sell illegal weapons, including an Ekol Viper, at a car boot sale in Billericay. Numerous courier receipts were recovered when his home address was searched, one of which was labelled ‘Bruni 4’.

When interviewed, Dawes admitted possessing and supplying the Ekol and Bruni weapons to the man in Essex, as well as ordering the guns seized by Border Force. However, he said he was unaware that front-venting blank firearms were illegal.

“Although the guns Dawes imported could only fire blanks, they are illegal in the UK as they can easily be converted to fire live ammunition.

“The weapons he supplied could have ended up in the hands of criminals, including drug traffickers, who use them to instil fear, inflict violence and in some cases, to kill.

“The success of this investigation demonstrates our commitment to protect the public and tackle this threat.

“We will continue to work with key partners, such as Border Force, to prevent illegal firearms from entering the UK.”

Also found at Dawes’ home was a cache of other prohibited weapons, including CS spray, a retractable baton with the word ‘police’ written on it and a knuckle duster. A fake Nottinghamshire Police warrant card was found in a vehicle he had access to.

He said he’d bought the CS spray for his wife to use as self-defence, and that it and the baton came in a packaged deal with the Bruni. He also claimed to own the knuckle duster as a collector’s item, and that he’d bought the fake warrant card on the internet for a fancy dress party but had never used it.

He was given a two-year community order, 100 hours of unpaid work and placed on a 20-day ‘thinking skills’ programme at the same court today (21 October).