Three men have been convicted for importing illegal firearms and ammunition into the UK in the post, before trying to sell them to organised criminals. 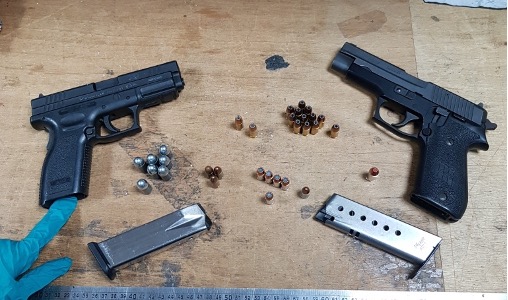 The National Crime Agency launched an investigation after two semi-automatic pistols and hollow-point bullets were intercepted at Coventry Airport on 24 January 2020. Border Force officers recovered the weapons, which had been concealed in an electronic safe in a package labelled as car parts, sent from Orlando, Florida.

The parcel was addressed to a ‘John Bob Walton’ in Cambridge. Five days later, a man claiming to be Walton called Parcelforce asking where it was. NCA investigators traced the number back to Dion Roberts, 33, from Coventry.

Roberts and a second man, Keston Joseph, 33, were stopped by NCA officers, supported by West Midlands Police, on 31 January 2020 while driving on King William Street in Coventry. Both were arrested.

Joseph was released under investigation but Roberts was remanded in custody and his phone seized. Analysis of his messages showed that he had arranged the importation with a contact known as ‘Shotta’ who was based in Florida.

The messages also showed that they had successfully imported another semi-automatic pistol two weeks prior to Roberts’ arrest, using the same method. In audio messages, Roberts instructed Shotta to send the weapon in a safe that was insulated with carbon paper and to “just show them as car parts innit”.

He also assured him, “We make a lot o' money bro. we make a lot of paper, a lotta lotta o' paper there to be made”.

When arranging the second importation, Roberts asked Shotta to include five rounds of ammunition with each gun. Shotta warned against this as he thought they would give off a ‘certain smell’, but Roberts told him this wouldn’t matter due to the insulation in the safe.

Roberts and Joseph collected the package containing the first weapon on 11 January 2020. Officers recovered a photo from Joseph's phone of him holding the gun, which had been taken that morning.

Phone records showed that following this, Roberts and Joseph were actively searching for buyers whilst simultaneously organising the shipment of the second package.

Roberts made contact with the third man, Dashan Caines, 46, from Birmingham, to bring him in on the conspiracy. Communication between the three men was ongoing and the investigation revealed they had travelled together to hide the safe.

With Roberts in custody and evidence secured against his co-conspirators, NCA armed officers arrested Caines and Joseph on 5 March 2020.

The safe was recovered two months later hidden in a bush near Roberts’ home with the firearm still inside. When NCA forensic scientists analysed the weapon, they discovered Caines’ DNA on it.

Today at Birmingham Crown Court, Caines and Joseph were found guilty of conspiring to acquire and sell prohibited weapons and ammunition following a five week trial.

Roberts pleaded guilty to the offences at an earlier hearing.

All three men will be sentenced at the same court on a date to be confirmed.

“These men planned to build a business on selling illegal weapons to other criminals. They saw this only as a money-making scheme, paying no consideration to the danger firearms pose to the public.

“Criminals who own firearms – often those linked to the supply of illegal drugs – use them to instil fear, inflict violence and in some cases, to kill.

“The success of this investigation reinforces our commitment to protect the public and tackle this threat.

“We will continue to work with key partners, such as Border Force, to prevent illegal firearms from entering the UK.”