Sentence increase for Londoner who had haul of firearms, explosives and fake police IDs

A firearms supplier who kept an arsenal of lethal weapons in his house, including in his daughter’s bedroom, has had his sentence increased to 11 years.

Darren Dixon, 32, from Kentish Town, London, was arrested in October 2019, following a joint investigation by the National Crime Agency and Metropolitan Police Service.

The haul of 26 firearms in his home included five handguns with loaded magazines, a sawn-off shotgun and a pump action shotgun, which were found in the room where his three-year-old daughter slept.

Explosives, gunpowder and live ammunition, as well as zombie knives, smoke grenades and garrotes, were also seized along with fake police IDs. 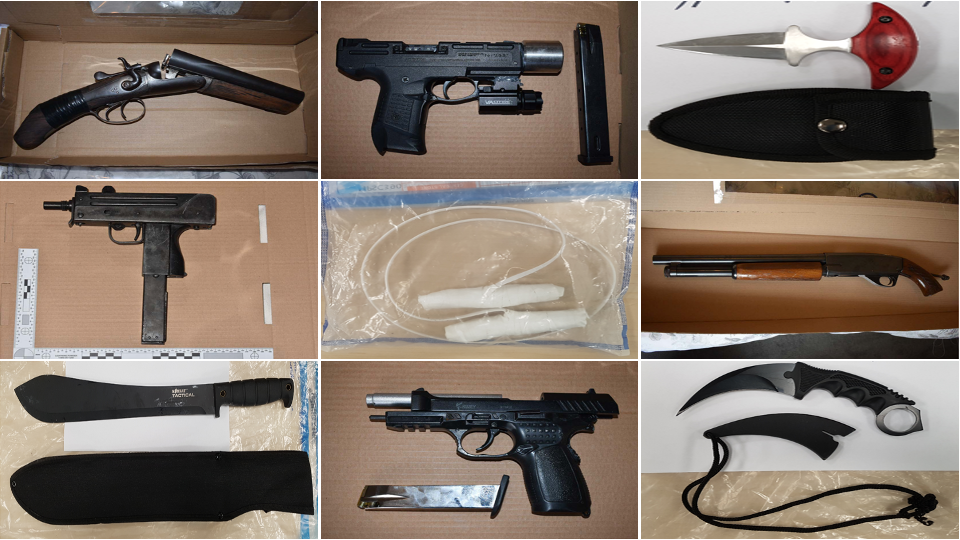 Dixon had purchased six firearms from a website based in Spain and a further three from a Slovenian website in the month prior to his arrest, which were shipped to his home address.

Following this, analysts established that six of those weapons were then sold on by Dixon on a different website.

Officers from the Organised Crime Partnership (OCP) – a specialist team of NCA and MPS officers – seized over 240 exhibits from Dixon’s house on the day of his arrest, when he admitted: “It has become a bit of an addiction [sic] with these guns.”

The exhibits included several fake ID warrant cards for the Metropolitan Police Service and Interpol in different names, a counterfeit search warrant for a property in North West London, MPS body armour and a rejected application to join the force.

In March 2020, Dixon admitted being involved in the importation, conversion and sale of prohibited firearms and pleaded guilty to all 15 charges against him.

He was initially sentenced to eight years in prison but on Wednesday 26 May, the Court of Appeal ruled this was unduly lenient and the Judge increased his jail term to eleven years.

“Dixon was a significant importer and supplier of weapons who was found with an extremely dangerous haul in his home.

“This investigation removed these lethal firearms from circulation, along with the risk that they could end up in the hands of organised criminals.

“Our work with overseas partners to target these online marketplaces is key to helping us reduce the number of illegal guns in the UK.

“These weapons are used in acts of serious violence, often by criminals involved in drugs supply, to coerce and intimidate. Supressing their availability is a priority for the NCA and UK law enforcement.”

“Dixon was found in possession of an alarming amount of lethal weapons – with some of them even shockingly being hidden where his child slept.

“We know that Dixon went on to sell some of these illegal firearms. Thankfully this intricate investigation by the Organised Crime Partnership resulted in 26 firearms and a host of other dangerous weapons being seized, which ultimately means that they will never be used to harm someone.

“Firearms have absolutely no place in London and we are committed to robustly targeting both those who carry them and those who supply them.”

The NCA’s work under Project Vizardlike targeted customers buying forward venting blank firing weapons online and importing them into the UK. Since November 2018, at least 522 prohibited weapons and 3500 rounds of ammunition have been seized in the UK by the NCA and police forces as part of this project, and 83 people have been arrested.