Two men arrested as part of a National Crime Agency investigation into the importation of cocaine and heroin have been jailed for more than 29 years.

Dutch nationals Dominique Anthony Ventura Da Costa, 36, and Shahzad Butt, 34, were both extradited to the UK after being detained by police in the Netherlands on European Arrest Warrants. 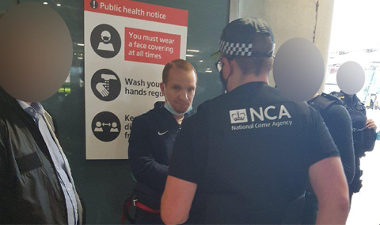 The duo were the last remaining members of a gang responsible for importing millions of pounds worth of class A drugs into the UK from the Netherlands hidden in loads of chicken in 2016 and 2017. Butt was the ringleader at the Dutch end of the operation, providing the means to source the meat and load the drugs for onward transportation to the UK.

Thirteen men have now been convicted as part of this investigation, with prison sentences totalling around 129 years handed out.

On three occasions, heroin and cocaine worth around £5 million were seized hidden in chicken shipments. However NCA investigators, working in partnership with the Dutch police, subsequently identified another 16 importations which they suspect contained drugs, which would have brought the overall street value to around £12 million.

Da Costa, who was extradited to the UK on 10 June 2021, was also part of the Dutch arm of the operation where drugs were placed within consignments for shipment to the UK. He provided a warehouse where the drugs were hidden amongst loads of chicken.

Butt collected the meat from a wholesaler and then concealed large quantities of class A drugs around the chicken pieces at Da Costa’s warehouse. He then took them to companies which transported the meat to cold storage businesses in the UK.

He was extradited in December 2020 and pleaded guilty to conspiracy to import drugs at Birmingham Crown Court on 16 April 2021.

Da Costa also pleaded guilty to this offence at the same court on 7 October 2021.

Butt was sentenced to 21 years and 10 months and Da Costa to seven years and four months today (22 December).

“The NCA will relentlessly pursue criminals who flee oversees, using our international network of officers and law enforcement partnerships to make sure there is no hiding place.

“Thirteen people have now been convicted as part of this investigation, which has prevented dangerous class A drugs ending up on our streets.

“Cocaine and heroin cause significant harm to the public through its links to violence and exploitation of young and vulnerable people. Dismantling the organised crime groups responsible is a priority for the NCA.”