A week-long joint operation involving the National Crime Agency’s International Crime Bureau and the police National Extradition Unit (NEU) has led to the capture of six wanted fugitives across the UK. 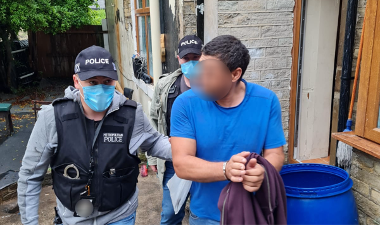 The week of activity was carried out in conjunction with partners at Interpol.

It saw NCA and NEU officers work together to track down a number individuals wanted for modern slavery, human trafficking and people smuggling offences in locations across the country.

Pătru was wanted by the authorities in Romania to serve a five year jail sentenced for trafficking a 13-year-old girl for the purposes of sexual exploitation.

The following day husband and wife Cătălin and Mihaela Didilă (aged 44 and 41) were both detained at the address they were living at in Spaines Road, Huddersfield.

Both are wanted in Romania where they are alleged to have been involved in an organised crime group involved in trafficking women and money laundering. In one case they are suspected of tricking a 17-year-old girl to come to the UK, where she was eventually forced into prostitution.

Sabah is wanted by the Hungarian authorities for his role in a plot to smuggle two groups of migrants across the Hungarian-Austrian border in 2016, for which he has been sentenced to three years in prison in his absence.

The same day a separate warrant was executed on Calvert Lane in Hull to arrest Lithuanian national Tomas Žemrieta, 37.

He absconded from custody in Lithuania in 2019 after being jailed for four years for being part of an organised crime group who recruited people in Lithuania and trafficked them to the UK for the purposes of labour exploitation.

He is wanted by the authorities in Romania, who say he attempted to smuggle six migrants across the border into Bulgaria in the back of a van in September 2020.

All those detained have now appeared before Westminster Magistrates Court and are the subject of extradition proceedings.

“This operation has seen the NCA work closely with Interpol and police colleagues at the National Extradition Unit to identify, track down and arrest six people wanted for serious offences overseas, living here in the UK.

“They thought they were out of reach but they were wrong, and as result of these arrests the British public are safer.

“But there is an important message to send out here and that is that the UK is not a safe haven for overseas fugitives or people involved in trans-national organised crime.

“We are determined to make sure wanted criminals spend their lives looking over their shoulder, knowing we are actively seeking to arrest them and return them to face justice.”