An HGV driver is tonight beginning an eight-year prison sentence for smuggling £1.7m worth of cocaine into the UK. 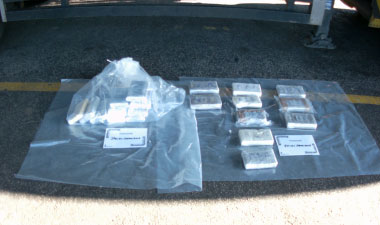 The HGV, which originated from Italy and with a manifested consignment of sheet metal, had been travelling from Le Havre in France.

The NCA began the investigation after Border Force officers searched the lorry and found the lining of the cab unit was loose. A sealed package containing 21kgs of cocaine was found concealed inside. The drugs had a street value of £1.7m.

“We were suspicious of this vehicle before it entered the UK and we were able to intercept it before it was able to bring a controlled substance into the UK drug market.

“The NCA working with partners will be relentless in pursuing persons who are intent on causing damage and harm to our communities.

“We continue to operate in this way, co-ordinating intelligence led activity to disrupt serious and organised crime.”

“This large detection of Class A drugs is an excellent example of both the vigilance of Border Force officers and close links with the NCA.

“Sharing intelligence between law enforcement partners is crucial in the fight to secure our borders against all types of smuggling.

“We will continue this vital co-operation to ensure that anyone caught with illegal drugs faces prosecution.”