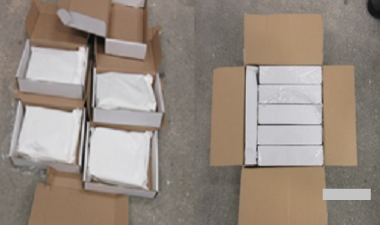 A 26-year-old woman and 28-year-old man were detained by the NCA following a raid on a property in Newport on 22 January, while a 30-year-old man was arrested at an address in Bedminster, Bristol, the following day.

The arrests were supported by Gwent Police and the South West Regional Organised Crime Unit.

All were held on suspicion of importing class A drugs, the man and woman detained in Newport were released under investigation after being questioned, while the man arrested in Bristol was bailed pending further enquiries.

The arrests followed the discovery of two packages, each containing around six kilos of cocaine, by Border Force officers carrying out checks at a parcel depot in London. Once cut and sold at street level the drugs would have had a value in excess of £1 million.

The identical packages had been sent to the UK from the Netherlands. Investigations into the source are ongoing.

“Organised criminals networks often use infrastructure like the postal and fast parcel system to bring their illicit commodities into the UK, but we are determined to do all we can to stop them.

“In this case, working with our colleagues at Border Force, we were able to prevent a sizeable quantity of class A drugs from making it onto our streets, where they would have fuelled further exploitation and violence.

“Our investigations into these attempted importations continues.”

“Border Force officers are at the forefront of the fight to keep illegal drugs out of the country. The estimated street value of this cocaine would have been more than £1m, and by making this seizure we have made a considerable dent in the profits of the criminals involved.

“Every year Border Force officers seize Class A drugs worth hundreds of millions of pounds. Working with law enforcement partners like the NCA we are determined to prevent drug trafficking and to bring those responsible to justice.”