Over £400,000 of suspected criminal cash has been seized in London as part of an Organised Crime Partnership (OCP) investigation into a drug supply network believed to be running their business over the encrypted comms platform EncroChat.

Investigators from the OCP – a joint NCA and Metropolitan Police Service unit – analysed thousands of EncroChat messages which referenced the movement of vast sums of cocaine and money throughout the UK. 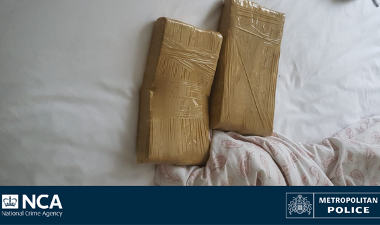 Yesterday (26/05/2021) officers searched two flats, one in Islington and one in Wembley, and seized over £200,000 in cash at each, some of which was packaged up and taped in block shapes.

Altjon Gjoni, 38, and Bejar Cozminca, 30, both Albanian nationals, were arrested and have since been charged with drug supply and money laundering offences.

They are due to appear at Snaresbrook Crown Court on 23 June 2021.